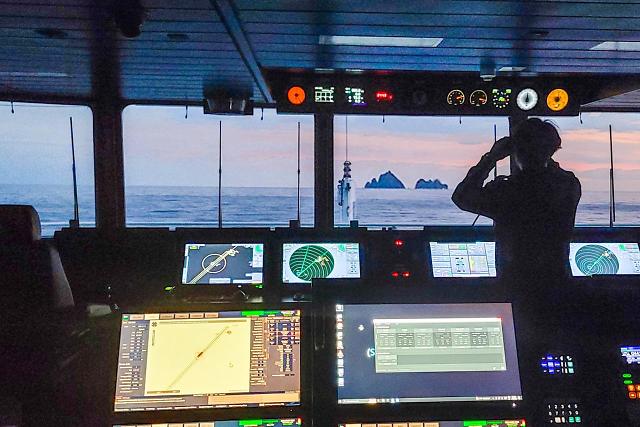 SEOUL -- A 9,200-ton ship installed with a remote autonomous system developed by Samsung Heavy Industries, a major shipbuilder in South Korea, has completed its clean and trouble-free test run on a coastal sea route covering about 950 kilometers (590 miles) for four days to prove the superior performance of avoiding collision with obstacles on a long voyage.

In its test run that began on November 15 in waster off the southwestern port city of Mokpo, Samsung Heavy Industries (SHI) said that a training ship run by Mokpo National Maritime University has sailed up to Dokdo, a chain of rocky islets located in the middle of waters between the Korean peninsula and Japan.

SHI said that the test ship equipped with a remote autonomous system called "Samsung Autonomous Ship (SAS)" has safely avoided the danger of colliding with other ships 29 times. In an area where fishing operations are active, SAS monitored several fishing boats approaching at the same time and presented an accurate and safe avoidance path every 5 seconds.

SAS can recognize surrounding vessels and obstacles while assessing the risk of collision to find an optimal route. The shipbuilder said its solution combined radar, an automatic identification system, and camera images, along with automatic engine and ladder control as well as a 360-degree around-view function that monitors the surroundings without blind spots at day and night.

Due to the nature of South Korea's marine environment with many islands, SHI said that the test run provided an opportunity to upgrade autonomous navigation technology to the next level. "This demonstration success is a meaningful achievement that confirms the performance and operational stability of SAS in a real complex maritime situation like urban roads," SHI's research center head Kim Hyun-joe said in a statement on November 24.

South Korea has no safety regulations that can test autonomous ships at sea. This is the first case in which SHI established government-approved guidelines with Mokpo National Maritime University and South Korea's maritime classification society, KR, laying the legal basis for the demonstration of autonomous maritime operation.

SHI's domestic rival, Daewoo Shipbuilding & Marine Engineering (DSME) has completed the on-site performance run of its test smart ship named "DAN-V" for autonomous operation off Hwaseong, about 30 kilometers (18 miles) southwest of Seoul, using its smart ship platform DS4 that would be applied to an actual ship in 2023.

Smart ships are expected to revolutionize the landscape of ship design and operations. Smart shipping can be divided into unmanned ships ruled by an operator from a control center onshore and autonomous ships which use a computer on board that takes decisions about the route, speed, fuel consumption, maintenance and even mooring in the harbor.

Lloyd's Register, a global professional services company specializing in engineering and technology for the maritime industry, has classified six levels for autonomous ships.

For level 1 and level ships, all actions are taken by a human operator, but a decision support tool would be present and information could be delivered from shore. A level 3 ship would have a human in the loop for all operational decisions and actions. The human would be able to intercede and override autonomous operations. A level 4 ship would be similar, but the human is only a supervisor with no control over operations. Level 5 and Level 6 ships are fully autonomous.