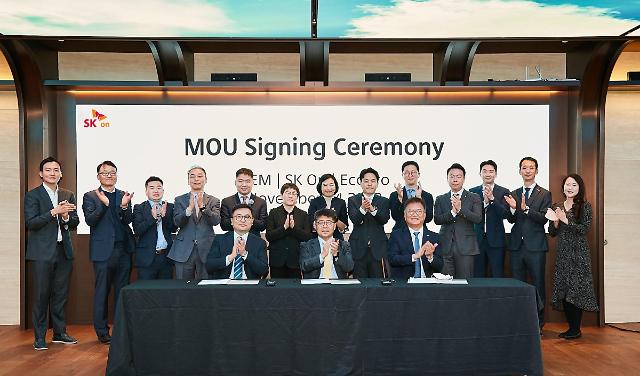 [Courtesy of SK on]

SEOUL -- A U.S. inflation reduction act puts pressure on many South Korean companies to reduce their traditional reliance on Chinese raw materials and set up a diversified supply chain, especially in the manufacturing and distribution of electric vehicle batteries. Realistically, it's hard to cast off the yoke of the world's second-largest economic power which has already established itself as South Korea's indispensable trade partner.

SK on, a battery maker affiliated with South Korea's SK Group, is no exception as international raw material prices remain unstable. In its latest deal that underlines an unavoidable cooperative structure, SK on tied up with Green Eco Manufacture (GEM), a cobalt refinery and lithium cathode precursor manufacturer in China, and EcoPro BM, a battery material producer in South Korea, to establish a joint venture in Indonesia.

The joint venture is designed to establish a stable supply of mixed hydroxide precipitate (MHP), a nickel intermediary product for nickel sulfate. Nickel sulfate has been a preferred chemical feed in the production of cathode materials, with global production expanding considerably largely due to capacity expansions led by China.

Automakers and battery companies have made significant investments in developing and securing supply from Indonesia, focusing on MHP sourced from nickel laterite ores. MHP is cost-effective, but there are concerns over the market’s reliance on Indonesia-sourced material. China is the biggest consumer of MHP.

SK on and its partners would build a joint plant in an industrial park in Morowali in Indonesia's Sulawesi Province to produce MHP from the third quarter of 2024 and expand cooperation in the production of precursors, an intermediate material for cathodes which are manufactured by combining nickel and other metals. At the Hengjaya mine in Sulawesi, they would secure nickel oxide ores, which can be mined in the open air.

GEM will offer a high-pressure acid-leaching smelting technology that extracts pure nickel from nickel oxide ores. GEM's key products include NCM ternary precursors, which have been sold to Samsung SDI and Ecopro BM. NCM contains nickel, cobalt and manganese, and the proportion of nickel is high so that battery producers can save costs and extend the driving range.

Nickel is cheaper than cobalt, which is an expensive rare-earth element widely used in lithium-ion batteries and is vulnerable to sudden price fluctuations. EcoPro BM has provided high-nickel cathode materials to SK on.

Based on MHP, SK on considers producing nickel sulfate and precursors in South Korea for use at its U.S. battery plant to overcome the inflation reduction act (IRA) that only subsidizes electric vehicles using batteries, which are assembled in North America and contain more than a certain percentage of core minerals extracted in the region. SK On and Ford have agreed to build a plant for the production of cathode materials to be shipped to their battery joint venture called "BlueOval SK."

SK on admits that securing a stable material supply chain has become more important than ever in the battery industry to cope with the growing volatility of raw material prices. "Cooperation between the three companies is very meaningful in that they have stably established a global nickel supply chain," Shin Young-ki in charge of SK on's purchasing said in a statement on November 25.

GEM is not alone among Chinese companies seeking to bypass U.S. restrictions through cooperation with South Korean partners. CNGR Advanced Material, a major precursor maker in China, proposed the injection of some 1.0 trillion won ($754 million) on November 24 in building a plant in South Korea's southeastern industrial city of Pohang by 2030 for the production of 250,000 tons of nickel sulfate and 100,000 tons of precursors per year.

CNGR's customers include Samsung SDI, SK on, and South Korea's leading steel group POSCO, which has adopted an aggressive strategy to become a global player in the battery material market.

South Korean companies have strived to establish a stable supply network of raw materials through a series of preemptive investments and partnerships with foreign companies. In October 2022, SK on acquired a 10 percent stake in Lake Resources, a clean lithium developer based in Australia, to receive 230,000 tons of high-purity lithium for up to 10 years, starting in the fourth quarter of 2024. Lake Resources owns mining rights in four lithium salt lakes and one lithium mine in Argentina.

In a deal on November 7, SK on signed a five-year contract to receive about 57,000 tons of lithium hydroxide from SQM, a Chilean supplier of plant nutrients, iodine, lithium and industrial chemicals. Lithium hydroxide is a key material for lithium-ion battery cathodes.