$4.29 billion earmarked for production of homemade light-armed helicopters by 2031 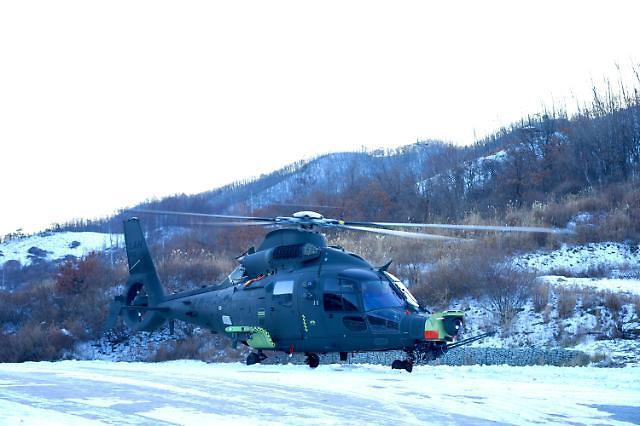 
SEOUL -- A military program to produce homemade light-armed helicopters developed by Korea Aerospace Industries (KAI), the sole aircraft maker in South Korea, got approval with an injection of 5.75 trillion won ($4.29 billion) for nine years by 2031. The program is aimed at replacing an aging fleet of light helicopters such as MD500s and AH-1S Cobra.

The green light came at a meeting chaired by Defense Minister Lee Jong-sup,   according to the Defense Acquisition Program Administration (DAPA), a state arms procurement agency. A field operation test will be conducted between 2024 and 2025. South Korea became the seventh country in the world to produce attack helicopters.

KAI's light-armed helicopter (LAH) passed a nine-week field test in a Canadian territory with an average winter temperature of minus 32 degrees Celsius to assess its effectiveness and suitability for combat in February 2022, about four years after a prototype was released in 2018.

The development of light-armed helicopters was based on H-155, a twin-engine helicopter created by European aircraft maker Airbus. The LAH carrying a 20mm machine gun and four anti-tank missiles or 70mm rocket pods can fly at a maximum speed of 324 kilometers (201 miles) per hour. KAI plans to attach "Cheongeom," a homemade air-to-ground missile. T

The LAH project is aimed at developing attack helicopters suitable for a future battlefield environment with state-of-the-art aviation electronics equipment and homemade armament.

A military scheme has been proposed to utilize light attack helicopters for various missions. KAI would secure core technologies for future aircraft operations and manned-unmanned teaming (MUM-T), which is the cooperative employment of unmanned assets with traditional manned platforms. MUM-T operations combine the strengths of each platform to increase situational awareness, allowing troops to conduct operations that include combat support and intelligence, surveillance, and reconnaissance missions.

In March 2021, KAI tied up with Israel Aerospace Industries (IAI) on cooperation for a manned and unmanned teaming system. KAI would demonstrate an operation system combining loitering munitions and helicopters. A loitering munition, also known as a suicide drone, loiters around the target area for some time and attacks once a target is located. The weapon enables fast reaction times against concealed or hidden targets and allows more selective targeting.