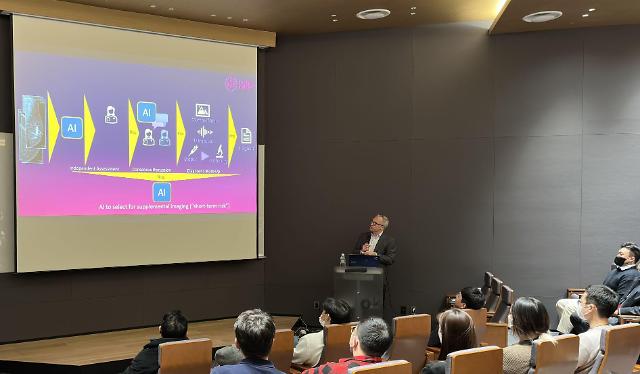 SEOUL -- "Lunit INSIGHT MMG," a solution specializing in detecting breast cancer created by South Korea's medical artificial intelligence company Lunit, turned out to be more effective when it performs diagnosis tasks with a human doctor rather than when only two human doctors identify the disease. The adoption of solution can increase work efficiency by replacing human experts who are prone to making mistakes.

Lunit's AI-based solution uses software robots to compare and analyze x-rays and medical images of breast cancer patients and healthy people. When the solution detects an anomaly, human supervisors are notified about the situation and the patient would take extra tests to check to see if there really is breast cancer. The solution was approved by the Taiwanese government's green light for commercialization in August 2022.

In many European countries, it is regulated for an A-based medical image analytics solution to be supervised by two radiologists for double-reading of the images. However, in some countries, hospitals and medical organizations only operate an AI smart medical solution or have one human specialist supervise it.

Lunit tested its AI solution through the real-life simulation of three situations -- two human radiologists reading images, Lunit INSIGHT MMG and one human radiologist, and only Lunit's smart solutions -- and compared the test results. The "Real-World Data" (RWD), datasets containing the analysis of 55,579 Swedish women who had received screening tests for breast cancer using Lunit Insight MMG between April 1, 2021, and June 9, 2022, was released at an annual event held by the Radiological Society of North America (RSNA), an international community for radiologists on November 27.

Compared to two human workers' collaboration, the teamwork between a human doctor and an AI solution showed a lower rate of patient recall in which patients should be called back to take the test again. "Through this study, it has been shown that AI will become the standard for breast cancer screening," Lunit CEO Seo Beom-seok said in a statement on November 28.

According to data released by global market research firm MarketsandMarkets Research, the global diagnostic imaging market is expected to reach $35 billion by 2026. In October 2022, SEHA, a health service company based in the United Arab Emirates, signed an agreement with Lunit to verify the performance of Lunit INSIGHT MMG. The Middle Eastern hospital agency will consider the adoption after verifying the performance by the end of 2022.