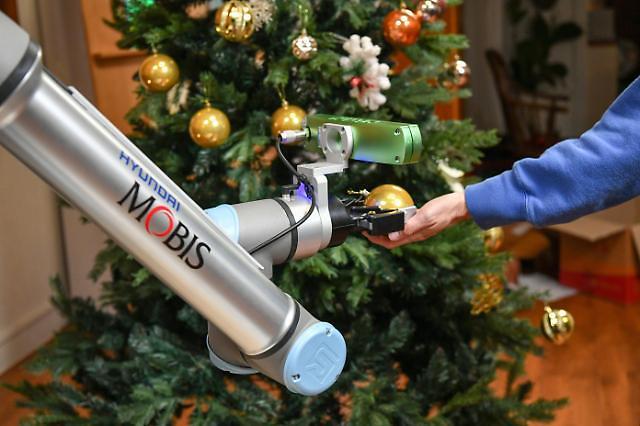 SEOUL -- Self-driving cooperative robots created by Hyundai Mobis, the parts-making wing of South Korea's Hyundai auto group, will be demonstrated at a factory in the southern port city of Ulsan to increase work efficiency. The robots can move freely in all directions using light detection and ranging (LiDAR) sensors and cameras.

Hyundai Mobis said two types of robots -- mobile robots with multi-joint robotic arms and logistic robots -- will be demonstrated to help human workers in Ulsan. The mobile robots can carry out various tasks such as arranging products at stores and carrying coffees from baristas to customers. Using LiDAR sensors, they measure the distance between sensors and target objects with laser beams.

The logistic robots will be demonstrated to carry necessary items by moving around crowded manufacturing sites. The robot capable of loading up to 200 kilograms (440 pounds) figures out its location through a camera and ultrasonic waves. They can carry cargo by avoiding many different obstacles and human workers using LiDAR sensors. A control algorithm will prevent logistics robots from crashing into each other by predicting their moving direction.

Cooperative robots are used in various sectors because of their autonomous operation functions and interactive capabilities. In August 2021, Kyochon F&B, a fried chicken franchise operator, adopted a cooperative robot in the western port city of Incheon to cook fried chicken with their human coworkers. According to data released by Grand View Research, a global market research firm, the global market for collaborative robots will reach $10.1 billion by 2025.