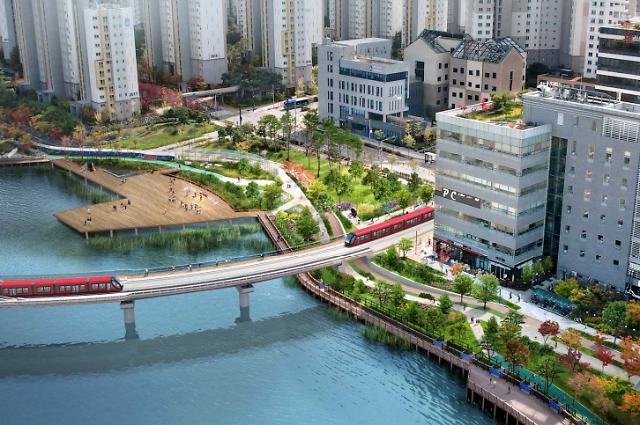 SEOUL -- A tram line that connects a planned new town area in southeastern Seoul to a satellite city of Seongnam will be built to reduce traffic congestion and popularize urban trams that disappeared in 1968. Wirye, a new town area with a population of some 100,000, was established to solve the capital city's overpopulation problems. Trams powered by batteries will run on a track near parks and other greenbelt zones in the area.

After the first tram line started its operation in Seoul in 1898, tram networks reached their peak in 1941 when the Korean peninsula was under Japan's colonial rule. However, the number of trams dwindled due to the popularization of other transportation such as buses.

Seoul secured state approval for a 261.4 billion won ($195.3 million) project to construct a tram line with a total length of 5.4 kilometers (3.3 miles) that connects Wirye new town and Seongnam. The construction will start in late November. A total of 10 trams will run every five minutes from Macheon in southeastern Seoul to southern Wirye located in Seongnam during the commute time to reduce traffic congestion. The ultra-low-floor electric track vehicles will begin operation in September 2025. Trams will be stored in an underground garage. Various parks will be built near the tram line so passengers can enjoy the scenery.

"We hope trams, the new eco-friendly transportation, will help Wirye reduce the problems of public transportation and boost the local economy," Seoul's urban infrastructure bureau head Kim Seong-bo said in a statement on November 28. Demands for trams are resurging as they are cheaper to install than subways. In 2020, South Korea's southern port city of Busan unveiled its scheme to build a tram network that covers 1.9 kilometers and serves five stops by 2025.