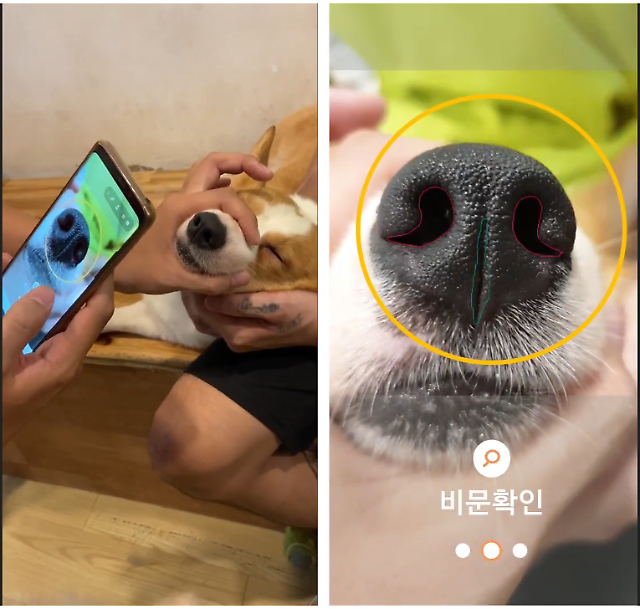 SEOUL -- Intelligence Science Laboratory (iSciLab), an artificial intelligence and machine learning venture company in South Korea, aims to nurture its animal biometric recognition platform based on nose prints into an international service, demonstrating the efficiency of its patented technology, which showed 99.99 percent accuracy through field tests.

Nose prints, similar to fingerprints, are found to be an effective solution for animal biometric recognition. iSciLab's pet registration platform called "AniPuppy" registers and manages each animal's unique nose prints using smartphones and AI. The platform was selected by the Ministry of Science and ICT for a two-year demonstration project in September to speed up commercialization.

"iSciLab has developed a technology that can recognize nose prints with 99.99 percent accuracy by conducting field tests for many years using 3D-based biometric and AI deep learning technology," said iSciLab founder Choi Hyeong-in, a U.S-educated professor who once headed Seoul National University's research institute of mathematics. "We have realized user convenience and economic efficiency through smartphones."

Prospects are bright as the Seoul government seeks to promote nose-print registration as a national task for animal welfare. AniPuppy was developed basically for the handy and quick registration of pet dogs, but it can be applied to other animals such as cats and cows.

"We will cooperate with local governments for two years to carry out a demonstration project to regulate a pet registration service based on nose-print recognition," Choi said, suggesting that nose-print recognition could be a means of registering animals worldwide, replacing radiofrequency identification (RFID) adopted in the United States and other countries.

Devices and systems used for electronic identification include microchips implanted by veterinarians or electronic tags. Since 2014, it has been mandatory to register pet dogs over two months old with RFID microchips or external identification tags in South Korea. Failure to register will result in a fine of up to one million won ($754), but registration has been slow mainly due to negative perceptions about inserting microchips in the animal body.

South Korea's pet industry has seen rapid growth, leading to the emergence of pet-related businesses such as one-stop pet care stores, pet academies, pet hotels, and thousands of animal hospitals. In 2021, about six million dogs and 2.5 million cats lived with human companions. According to data released by market research firm Statista, the value of South Korea's pet market is expected to reach six trillion won by 2027.

Data released by the Ministry of Agriculture, Food and Rural Affairs in 2021 showed that about 26 percent of pet owners have considered giving up raising their pets. About 130,000 animals including dogs and cats are abandoned in South Korea every year. Choi said that AniPuppy would help local governments implement their pet registration management work efficiently.

For years, iSciLab researchers have carried out research and development for commercialization without attracting any visible investments. They now think that preparations for commercialization have been completed. The company will actively look for investors if the government-sponsored demonstration project yields good results.

"We are now trying to establish a separate corporation and attract investment for full-fledged domestic and international operations and look for strategic and financial investors," Choi said in an interview with Aju Business Daily. He envisioned a bigger picture to become a B2C (business-to-consumer) platform operator and encourage finance and insurance companies to provide various pet insurance products by providing ID data.

Choi said his research began in 2012 while studying human biometric recognition technology, by referring to veterinary textbooks and foreign research cases that proved that nose prints can be used for biometric recognition like human fingerprints. "If dogs are given IDs based on nose prints, accurate individual management will be possible, and related industries such as pet medical care, insurance, healthcare, beauty, and hotels will grow."

Choi said that life insurance companies can offer specialized products such as pet insurance through the establishment of subsidiaries. "Pet companies will be able to manage the history of each pet and manage its entire life cycle from adoption to burial, improving the overall welfare of pets and revitalizing the industry."