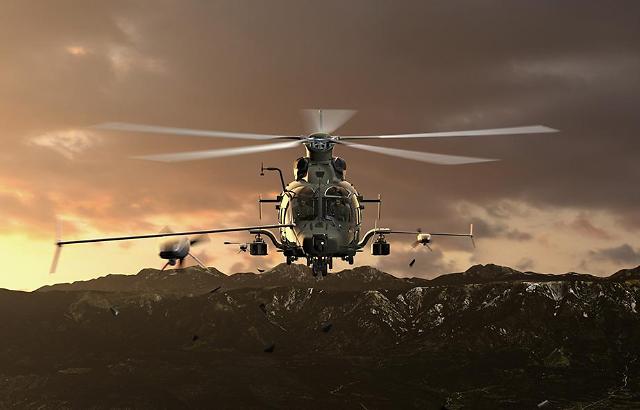 SEOUL -- Korea Aerospace Industries, the sole aircraft maker in South Korea, has tied up with a state research body to develop technologies for the combined use of small armed helicopters and unmanned aerial vehicles. A military scheme has been launched to utilize light attack helicopters for manned and unmanned teaming (MUM-T) operations, which are the cooperative employment of unmanned assets with traditional manned platforms.

MUM-T operations combine the strengths of each platform to increase situational awareness, allowing troops to conduct operations that include combat support and intelligence, surveillance, and reconnaissance missions.

KAI aims to lead the development of heliborne UAVs, which will be launched in 2023, by developing drone formation technology and a pilot decision support system. "We will continue to preoccupy core technologies and establish a Korean-style MUM-T system suitable for future battlefields," an unnamed KAI official said in a statement on November 30.

The agreement between KAI and KRIT came three days after a military program to produce KAI's light-armed helicopter (LAH) got approval with an injection of 5.75 trillion won ($4.29 billion) for nine years by 2031. The program is aimed at replacing an aging fleet of light helicopters such as MD500s and AH-1S Cobra.

KAI has tied up with Israel Aerospace Industries (IAI) on cooperation for a MUM-T system. KAI would demonstrate an operation system combining loitering munitions and helicopters. A loitering munition, also known as a suicide drone, loiters around the target area for some time and attacks once a target is located. The weapon enables fast reaction times against concealed or hidden targets and allows more selective targeting.

In November 2021, KAI secured a 10 percent stake in Konan Technology, a domestic company that offers IT solutions and data analysis. Through the joint development of autonomous flight and collision avoidance AI algorithms as well as software to analyze large-capacity flight and operational data, KAI would secure core technologies for future aircraft operations and MUM-T.