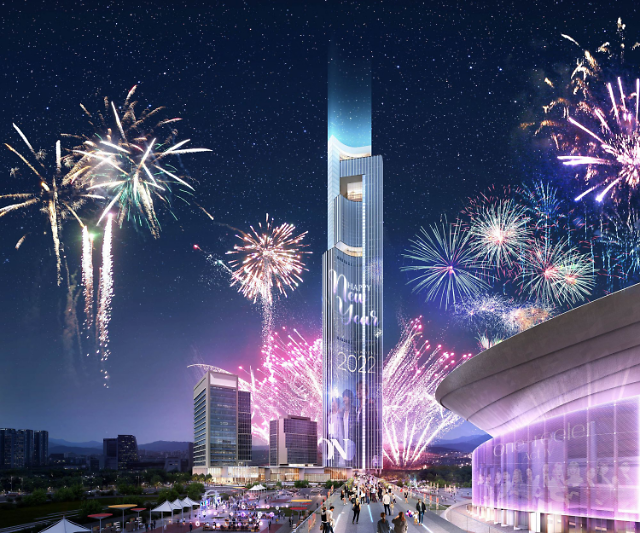 
SEOUL -- The construction of a major K-culture cluster proposed by CJ ENM, a South Korean entertainment group that produced the Oscar-winning 2020 film "Parasite," was finally put on the right track after a bumpy start that caused a change of design. A more specific commitment came from Anschutz Entertainment Group, a sports and live entertainment company based in Los Angeles.

Anschutz Entertainment Group (AEG) and CJ LiveCity, a cultural content production and real estate development company affiliated with CJ ENM, signed a memorandum of understanding with Goyang City on November 30 at their meeting in Osaka, Japan. CJ LiveCity and AEG would create a joint venture to cooperate in operating an arena concert hall capable of accommodating 60,000 spectators in Goyang, a northwestern satellite city of Seoul.

AEG would transfer performance planning and operation skills and organize performances by foreign artists and music awards. "We will provide all administrative support so that a global Hallyu (Korean cultural wave) holy place can be established in our region with the cooperation of CJ LiveCity and AEG," Goyang City Mayor Lee Dong-hwan said in a statement on December 1.

AEG will cooperate to attract global companies and additional capital, while CJ LiveCity will lay the foundation for Goyang to attract domestic and foreign companies. "We hope that Goyang will become a global self-sufficient city with cultural, tourism, and content industries revitalized through South Korea's first K-culture platform base," Lee said.

Originally, a smaller arena for live K-pop performances was to be built under the concept of a connected concert hall where live performances are remotely connected to the world. The K-culture valley project, proposed in 2016, won approval from Goyang City in June 2021 through several changes to its original blueprint, and a groundbreaking ceremony was held in October 2021.

A final blueprint disclosed by CJ LiveCity in April 2022 called for the construction of the K-culture cluster on 326,400 square meters of land that will serve as the production hub of CJ ENM and provide a place for young K-content fans around the world to stay for a long time and enjoy cultural life comfortably. The complex will have accommodation facilities and an 88-story landmark tower.

There are several iconic venues for K-pop concerts in Seoul, but none is solely dedicated to music-related events. The Seoul city government would build a K-pop concert complex called "Seoul Arena" in a northern residential district to house two music performance halls and seven theaters. Seoul Arena would incorporate technologies such as virtual reality and augmented reality into performance content and provide live performances and streaming services by linking various online platforms.