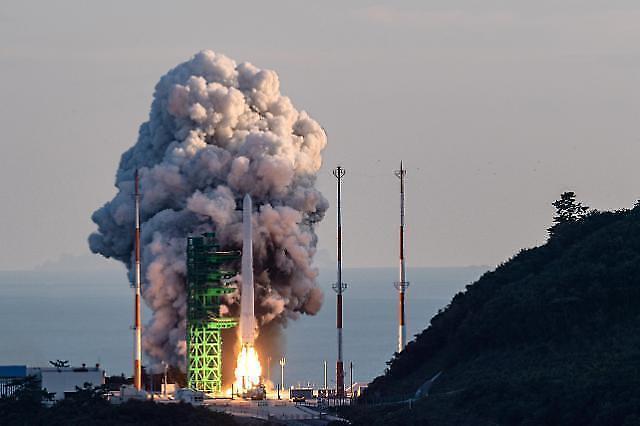 SEOUL -- Hanwha Aerospace, an aircraft parts maker involved in the production of engines for South Korea's homegrown space rocket, secured a deal worth about 286 billion won ($212 million) to lead and supervise the production of three space rockets that will be launched for three years from 2023. The deal marked the beginning of South Korea's "Space Pioneer" program aimed at creating a self-sustaining industrial ecosystem and cultivating companies like Space X, a U.S. aerospace company.

Hanwha Aerospace, the defense and space technology flagship of Hanwha Group, said it would sequentially receive comprehensive technology and know-how owned by the Korea Aerospace Research Institute (KARI), a state aeronautics and space agency that has been involved in the development of homemade rockets for 13 years.

Hanwha Aerospace should develop technologies that can reduce costs and secure reliability by improving the performance of Nuri, a three-stage indigenous rocket that put satellites into target orbit in June 2022.

On behalf of KARI, Hanwha Aerospace will be responsible for the design, manufacture, assembly, and test evaluation of projectiles, as well as the management of contracts and quality control for participating companies. The transfer of technologies will be gradual as KARI will analyze and tune the output of engines through a combustion test, verify parts using KARI's test facilities, and jointly manage the launch of assembled projectiles.

Nuri, also known as KSLV-II, can thrust up to 3.3 tons of payload into Earth's low orbit. It is 47.2 meters long and weighs about 200 tons. The first stage uses a cluster of four 75-ton liquid engines. A 75-ton liquid-propellant engine was designed for the second stage and a seven-ton liquid engine for the third stage. Nuri uses a gas generator engine, which has lower thrust power than multi-stage combustion engines.

South Korean companies will be supported to build a supply chain using domestic parts as much as possible. Private companies and stage engineers will also work together for the development of KSLV-III, a next-generation launch vehicle capable of thrusting bigger payloads for lunar or Mars exploration.  The next-generation launch vehicle will be designed to thrust up to 10 tons into low orbit and 3.7 tons into a geostationary transfer orbit.

The KSLV-III project would cost some 2.01 trillion won from 2023 to 2032. KSLV-III will use five 100-ton multi-stage combustion cycle liquid engines clustered for its first-stage projectile and two 10-ton liquid engines for the second stage. Re-ignition and thrust control technology will be applied to facilitate the development of reusable projectiles that can drastically reduce costs.

President Yoon Suk-yeol has called for the establishment of a state aerospace agency like NASA and the early development of a new launch vehicle. The science ministry said the next-generation projectile would be used three times to verify the performance of a moon orbit test satellite in 2030 and launch the lunar lander's preliminary model in 2031 and the final model in 2032.