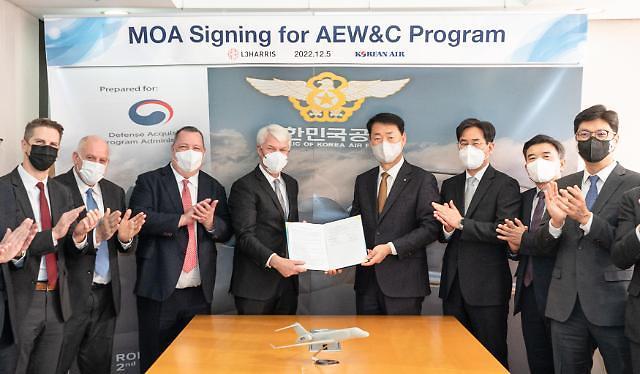 Under a comprehensive business cooperation agreement with L3Harris, Korean Air said it would participate in remodeling, parts production for additional aircraft, and personnel training if Global 6500 is adopted.

South Korea's aerial early warning system is based mainly on foreign equipment such as Boeing 737 AEW&C, RQ-4 Global Hawks, and RC-800s. A high-altitude reconnaissance squadron with RQ-4 Global Hawk unmanned aerial vehicles has been set up to support ground troop actions by scanning and tracking the movement of enemy missiles and troops. RQ-4s can work together with advanced stealth jets.

For the mid-altitude Baekdu program, South Korea has deployed RC-800s based on Raytheon's Hawker 800XP to intercept radio signals from electronic devices as well as Falcon 2000's modified aircraft.

Efforts to acquire independent technology and homemade reconnaissance aircraft have been largely unsuccessful because U.S. and other foreign companies were reluctant to transfer key technologies. Tired of the incessant payment of huge repair costs to maintain Boeing 737 AEW&C planes, DAPA now talks about the necessity of acquiring independent technologies for the development of a homemade AEW&C system.

Through the performance improvement of Baekdu planes, South Korean companies think they can enhance the level of technologies for designing an independent AEW&C system as they did in developing the  KF-21 fighter jet that made its maiden flight in July 2022. Still, DAPA needs a reliable airplane that can fill up various types of electronic equipment and meet Air Force requirements. In March 2022, South Korea used a Boeing 737-500 plane modified into a flying testbed to verify the performance of a computer-controlled array antenna system for KF-21.