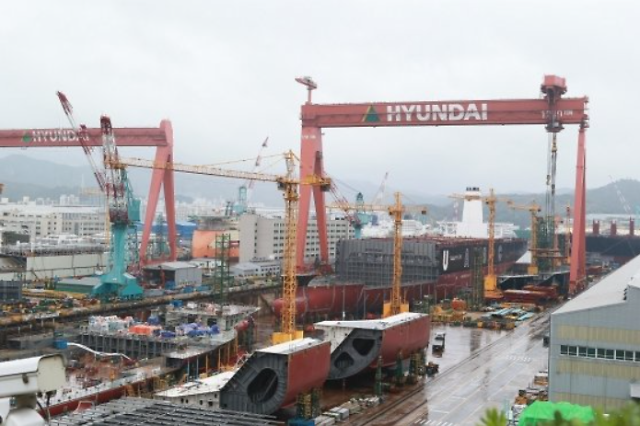 SEOUL -- South Korea's Hyundai shipbuilding group will develop a ship-type floating facility that can store and vaporize liquefied ammonia offshore for transfer to onshore pipelines. Ammonia is seen as a next-generation fuel that emits no carbon oxide during combustion, but floating storage and regasification facilities for ammonia at sea have not yet been constructed globally.

In a joint project with Korea National Oil Corporation (KNOC) and Lloyd's Register, a London-based classification society, the Hyundai Heavy Industries Group will develop an ammonia regasification system for a floating storage regasification unit (FSRU), which is a special type of tanker fitted with equipment to gently warm liquefied ammonia back into a gaseous state so it can be piped to customers on land.

KNOC will provide information on technologies, while the shipbuilding group will carry out the basic design of ammonia FSRU that would be reviewed and approved by Lloyd's. The shipbuilding group predicts a growing need for ammonia FSRUs that offer the advantages of shorter construction time and lower costs than onshore storage tanks and regasification plants.

"With cooperation with Hyundai Heavy Industries Group, it is possible to develop ammonia-FSRU for the first time in the world," KNOC's ESG head Ahn Beom-hee said in a statement on December 7.

Ammonia can reduce carbon emissions while maintaining power generation when burned with coal. It is considered an essential part of a sustainable hydrogen ecosystem due to its stability in supply and relatively easy storage and transportation. Ammonia can be used directly as a fuel in high-temperature fuel cells, internal combustion engines and gas turbines.

In a ceremony on December 2, nine South Korean companies including HDC Hyundai Industrial Development joined hands to build a new industrial pier equipped with large ammonia storage tanks and liquid cargo ship berthing facilities on reclaimed land near an industrial park in Dangjin, about 80 kilometers (49.7 miles) southwest of Seoul. When completed in 2030, the pier will be able to handle two million tons of ammonia per year.