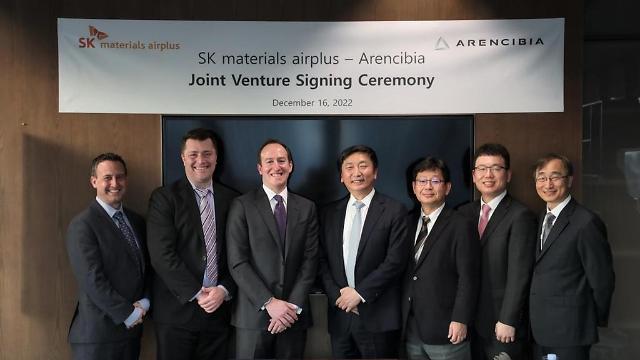 SEOUL -- SK materials airplus, an industrial gas company affiliated with South Korea's SK Group, will create a joint venture with Arencibia, a U.S. industrial gas supplier, to produce rare gases such as argon, helium and neon, which are essential for the production of semiconductors and displays, by recycling industrial exhaust gas.

South Korea is heavily dependent on imported rare gases that can be mass-produced only in the United States and several other countries. The production of neon gas, which is used to make chips in the semiconductor industry, was localized by South Korea's steel group POSCO in January 2022.

To secure a stable supply of neon gas, SK Hynix, the memory chip production wing of SK Group, has expanded the proportion of homemade neon gas to 40 percent in semiconductor production since a localized facility was completed in early 2022. Neon is a raw material for excimer laser gas which is used in semiconductor photolithography, a process of engraving electronic circuits on silicon wafers using ultraviolet rays with short wavelengths.

POSCO has been working with many companies to localize facilities for other imported chemical compounds such as Xenon and Krypton.