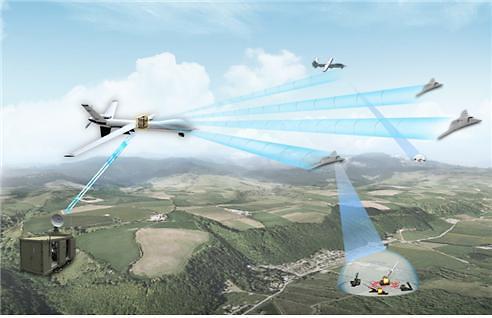 An active electronically scanned array (AESA) antenna is top-notch equipment that can electronically steer the beam of radio waves to point in different directions to send signals across a wider range of frequencies. Hanwha Systems, a South Korean defense product provider, showcased a localized AESA system for the country's homemade KF-21 fighter jet in August. The antenna array was developed through a project that began in 2016 after the United States refused to transfer the technology for the key part of a stealth aircraft.

The Agency for Defense Development (ADD) controlled by the Defense Ministry said that the agency collaborated with the Electronics and Telecommunications Research Institute (ETRI) to localize the multi-beamforming AESA antenna technology for the first time in the country. ETRI developed a high-performance radio-frequency (RF) chip and ADD provided an on-ground testing environment that could simulate mid-air operations.

The multi-beamforming capability gives the AESA antenna ability to interlink with four weapon systems and set up an independent communication network. The antenna can send and receive radio waves to and from any direction. According to ADD, the multi-beamforming capability enables the AESA antenna to set up a stable aerial communication network even in extreme weather conditions or in an area where radio signals are jammed.

"Using this antenna, we can dramatically increase the operational area on unmanned aerial vehicles (UAVs)," ADD said in a statement on December 27. While conventional AESA antenna could only interlink with one weapon system at a time, the new antenna can connect to four systems. The localized AESA antenna can also be used in private sectors including 6G communication, drone management, unmanned vessel control, and ultra-speed, high-accuracy data communications.