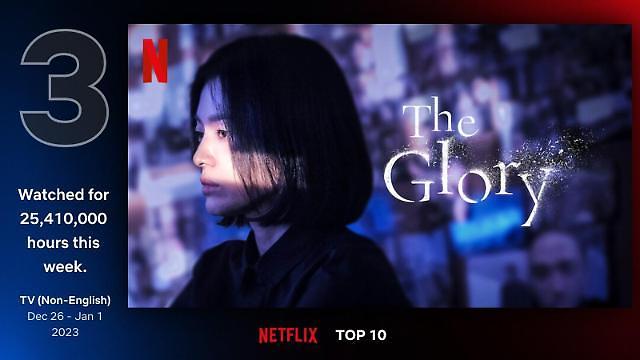 SEOUL -- South Korean thriller TV series "The Glory" became the third most-watched content on Netflix's non-English chart. The series depicts a story of a woman who suffered from vicious school bullying at high school taking revenge on bullies after becoming an adult.

The global streaming service giant said that the revenge series recorded some 25.4 million hours of viewing only three days after its release on December 30. The Glory was the third-most watched drama series on Netflix's weekly non-English series chart from December 26 to January 1. The most watched content was "Alice in Borderland: Season 2," a Japanese science fiction series.

In The Glory, famous actress Song Hye-kyo, plays a character named Moon Dong-eun who was victimized by her wealthy peers during her teenage years. Although Moon's teachers were aware of bullying, her friends were never punished properly. Moon later becomes an elementary school teacher and seeks revenge for her classmates.

According to data released by South Korea's education ministry in September 2022, about 54,000 students aged between nine and 18 have experienced bullying. Among various types of bullying, verbal abuse accounted for the largest portion with 41.8 percent, followed by physical abuse with 14.6 percent.

Le Sserafim, initially a six-member girl group formed by Hybe's music label Source Music, has worked as a five-member group since May 2022 when its member Kim Ga-ram was allegedly embroiled in school bullying. Source Music terminated the contract with the troubled member in July 2022.