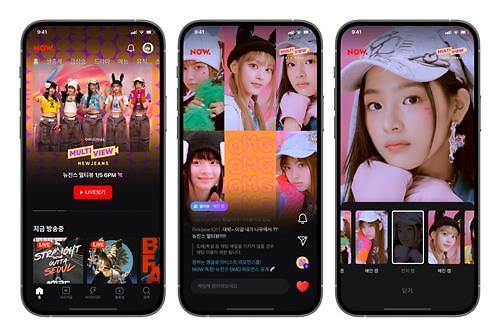 SEOUL -- Using Multiview technology, which enables fans to choose different angles of a concert stage in real-time, South Korea's top web portal service Naver will livestream a performance by NewJeans, a super rookie girl group regarded as one of the most loved K-pop rookie bands in 2022. Viewers can also zoom in on their favorite member while enjoying the concert.

Naver said in a statement that the five-member band's performance will be live broadcast on the company's live streaming platform called "Naver Now." at 6 p.m. (0900 GMT) on January 6. The group will perform OMG, a dance song that garnered explosive popularity for featuring electronic dance music and exciting dance rhythms. According to data released by iCharts, OMG entered the top 15 only three and a half hours after its release on January 2. The track's music video garnered more than 11 million views on YouTube.

NewJeans is a group formed by ADOR, a subsidiary label of the agency of BTS. The band's debut song Attention entered Billboard's global chart just nine days after its release and the weekly top song USA chart on Spotify, the world's most popular music streaming service, less than 50 days after the band's debut. Through OMG, the rookie girl band expressed their cautious feelings toward their loved ones while portraying winter vibes.