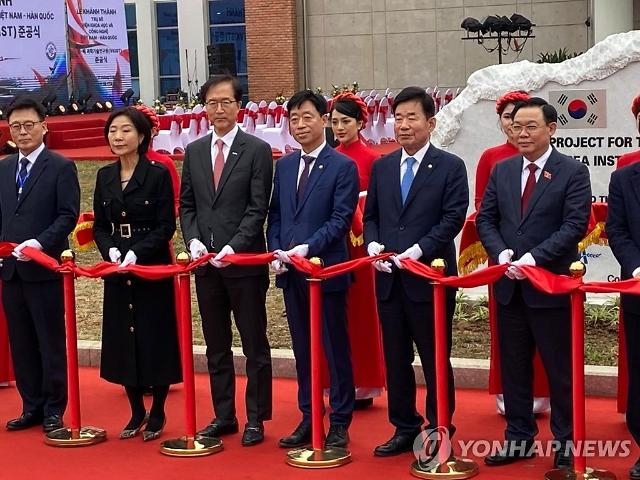 SEOUL -- South Korea and Vietnam held a ribbon-cutting ceremony for the Vietnam-Korea Institute of Science and Technology (VKIST) in the Vietnamese capital of Hanoi on January 17.

The VKIST is one of Vietnam’s largest research and development (R&D) centers which has been under construction with South Korea’s official development assistance (ODA) worth $70 million since 2014.

The two countries have worked together on the establishment of the VKIST modeling after the KIST which has contributed to South Korea’s industrialization since its creation with the assistance of the United States in 1966.

The VKIST has three research buildings and an administrative building on 231,404 square meters of land in the high-tech park. It possesses 592 different types of research equipment.

The institute has 36 researchers with doctorate degrees, many of whom studied at the KIST under an international research and development academy (IRDA) program.

The VKIST and the KIST plan to conduct joint research in diverse fields such as digital innovation, eco-friendly technology, and the Fourth Industrial Revolution.

The KIST quoted Speaker Kim as telling that the opening of the VKIST has carried significant meaning as it came after the two countries marked the 30th anniversary of diplomatic relations last month. He added the dedication ceremony signaled the beginning of the next 30 years for Korea and Vietnam.

Chairman Vuong Dinh Hue was also quoted as saying that the VKIST is a new model for Vietnam’s research and development of advanced technology. He expressed his gratitude to the Korean government for having provided assistance to Vietnam for the creation of the VKIST.

Vice Science Minister Oh has promised to provide further support for the VKIST to emerge as a science-technology R&D hub in Southeast Asia by stepping up research cooperation between the two countries.