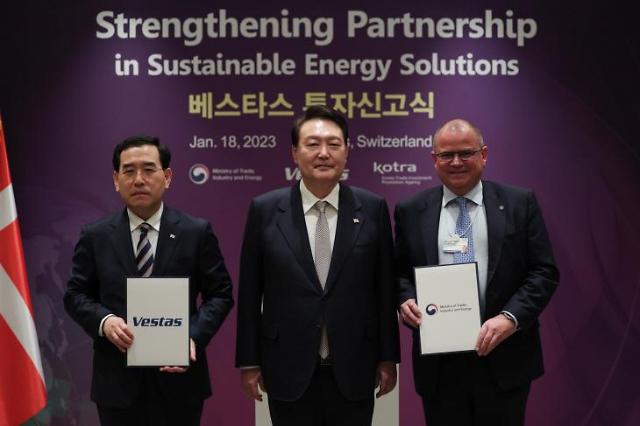 South Korean President Yoon Suk-yeol, center, poses with Henrik Andersen, president and CEO of Vestas Wind Systems, at a hotel in Davos, Switzerland, on January 18, during a ceremony for strengthening partnership in sustainable energy solutions. Andersen announced a plan to invest $300 million in Korea to build a turbine parts factory. At left is Korea’s Trade, Industry and Energy Minister Lee Chang-yang. [Yonhap]


SEOUL -- Vestas Wind Systems, the world’s top producer of wind turbines, has decided to invest $300 million (370 billion won) in South Korea to build a turbine parts factory. The Danish company has also disclosed a plan to move its Asia-Pacific headquarters from Singapore to Korea.

Henrik Andersen, president and CEO of Vestas, announced the decision during a ceremony for strengthening partnership in sustainable energy solutions at a hotel in Davos, Switzerland, on January 18, the South Korean presidential office said.

The office quoted President Yoon Suk-yeol, who attended the ceremony, as saying that Vestas’ investment and transfer of its Asia-Pacific headquarters to Korea will help the country become a wind production hub in the region and find a new export engine.

Korea’s partnership with Vestas came after President Yoon and Danish Prime Minister Mette Frederiksen agreed during their meeting in June 2022 that the two countries will expand investment in each other’s offshore wind power industries.

CEO Andersen was quoted as saying that his company’s investment in South Korea will help boost the Asian country’s wind power sector and create about 1,000 jobs. He added Vestas’ partnership with Korea can contribute to the country’s economy and its capacity to respond to climate change.

A presidential official said that Yoon was actively engaged in “sales diplomacy” to attract foreign investments and forge a partnership with global firms in various sectors, while taking part in the World Economic Forum (WEF) in Davos.

Before attending the forum, President Yoon made a four-day state visit to the United Arab Emirates (UAE) to strengthen a strategic partnership between the two countries. The UAE announced a decision to invest $30 billion (about 37 trillion won) in South Korea’s nuclear power, energy and defense sectors on January 15 after Yoon held a summit with UAE President Mohamed bin Zayed Al Nahyan in Abu Dhabi.

Trade, Industry and Energy Minister Lee Chang-yang, who took part in the ceremony in Davos, said that Vestas’ investment is meaningful as Korea can boost cooperation with the global leader in the wind power market.

Vestas has so far supplied 160 gigawatts of wind turbines installed in 88 countries. It said its sustainable energy solutions have already prevented 1.5 billion cubic tons of CO2 from being emitted into the atmosphere.