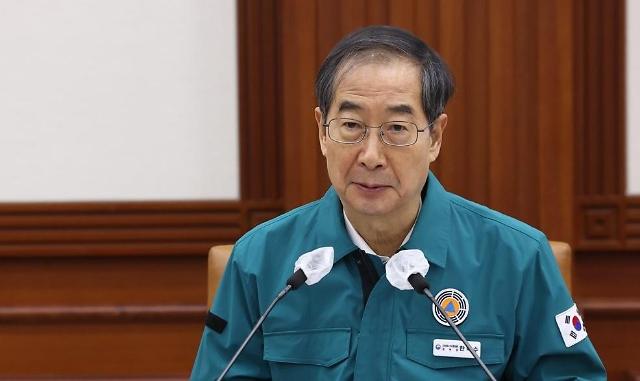 Prime Minister Han Duck-soo speaks during a virus response meeting at the government complex in Seoul on January 20. He disclosed a plan to lift the mask mandate for most indoor places from January 30. [Yonhap]

SEOUL --  South Korea plans to lift the mask mandate for most indoor places from January 30 as part of efforts to return to normal life three years after the outbreak of the COVID-19 pandemic.

Prime Minister Han Duck-soo said on January 20 that the mask guidelines will be eased from “mandatory” to “optional” except for some vulnerable indoor facilities as the daily caseload of coronavirus infections continues to fall.

He added that the mask mandate, however, will continue to be enforced for the time being in hospitals and drugstores as well as inside buses, subways and other public transportation means in order to protect people vulnerable to the pandemic.

Han explained that the country has now managed to meet three of the four conditions for the lifting of the mask mandate which were set by the health authorities in December 2022. The three conditions are a downward trend in new daily infections, a drop in the number of critically ill patients and deaths, and the medical capacity of quickly responding to the pandemic.

He added that the country can afford to deal with external risk factors as an effective quarantine system is in place to detect, isolate and treat foreign arrivals infected with the virus. He believed that the resurgence of COVID-19 in China will have little effect on Korea’s efforts to stave off the virus.

Han also said that the government has decided to lift the mask mandate at the end of this month after the January 21-24 Lunar New Year holiday during which around 30 million people, or 60 percent of the population, are expect to visit their hometowns or tourist attractions.

He has urged the central government as well as provincial and municipal authorities to make thorough preparations for a potential upsurge in new infections during the traditional holiday.

Besides, the prime minister has called on people aged 60 and older and other high-risk groups to receive an additional vaccine shot to prevent the infection of the coronavirus.

The mask mandate was introduced selectively for multi-purpose public facilities and high-risk places in October 2020. Then it was fully implemented both indoors and outdoors.

In May 2022, the government lifted the mandate partially in some outdoor places, including theaters and sports stadiums, where more than 50 people gather. Then in September, it scrapped the rule completely in all outdoor places.

However, over 60 percent of South Koreans still want to wear a face mask indoors even after the lifting of the mandate, according to a survey of 2,220 adults conducted by Lotte Members, a data analysis and consulting arm of the Lotte Group.

Fifty-nine percent of the respondents said that they are against the scrapping of the mask mandate. And 65.6 percent said they would continue to wear a mask for the time being.